Completing the roofing and smoke hood

I've been beavering away on a few smaller parts for the loco shed. The smoke hood and associated smoke stacks have been on the workbench for a while now. Then there's the shed doors to be constructed. 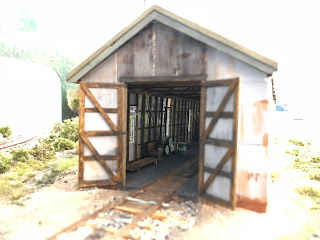 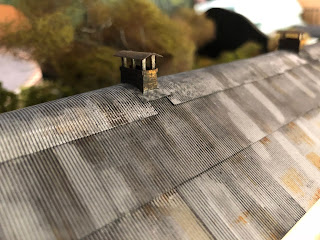 The last part of the building has been the extension of the roof. Yep, measure twice cut once, doesn't always get followed to the letter. Consequently the roof has been set aside for a while as I thought on the best way to move forward.

There are moments in this hobby, for me, where the fine art of procrastination seeps into the conscious mind, and makes the idea of moving forward simply impossible. That's the way it's been regarding this roof issue, for what seems like months. Well not seems like, it has been months. In the end the job ended up being easier than I thought. I had to remove all the iron and then cut it into two pieces. Then I extended the roof by the few millimetres it needed, then a reroof. The smoke stacks are made up of basswood with the top being made from cardstock that has had various paints put on to have it look like metal, somewhat weathered. Then it was simply a case of adding the curved iron for the top of the roof, and yep, there she was. I've gotta say I really like the mass of this building and what it adds to that end of the layout. 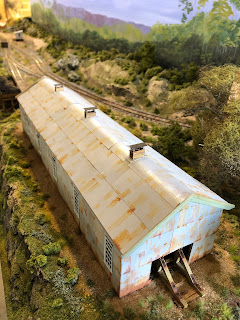 So there she is weathered up a little bit, and set into the scene. 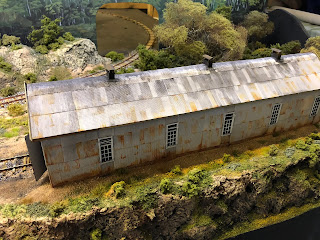 I've enjoyed the construction of this building, even though it's taken way too long. The finished product is something I'm happy with, can't wait to have built some steam to be in there!
The 'to do' list doen't seem to be any shorter these days.

Some Sites I use for Supplies and Inspiration.